Picasso and Antiquity. Line and Clay.

Picasso and Antiquity. Line and Clay.

As part of the series of art exhibitions Divine Dialogues, the Museum of Cycladic Art organizes this year, from 20 June to 20 October, a major exhibition titled Picasso and Antiquity. Line and clay.

It is a rare exhibition about Picasso and his inspiration from antiquity in conversation with ancient works of art, curated by Professor N. C. Stampolidis and Olivier Berggruen.
The greatest of twentieth-century modern artists is famous for his spectacular paintings but less for his drawings, engravings, and pottery. The combination of these media closely recalls antiquity and has produced works inspired by the Creto-Mycenaean and Greek worlds and the Mediterranean civilizations in general.

In the exhibition Picasso and Antiquity. Line and clay rare works by Picasso, depicting marine creatures, animals, human figures, mythological scenes, and scenes inspired by ancient tragedy and comedy, converse with ancient artefacts in another unique “Divine Dialogue” at the Museum of Cycladic Art. A whole world is revealed in the Museum of Cycladic Art, a world carried by the artist inside him, a world of antiquities discovered not necessarily in the ancient lands of the Mediterranean but in European museums, in books, and in conversations with Christian Zervos and Jean Cocteau. 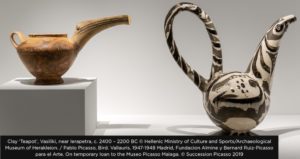