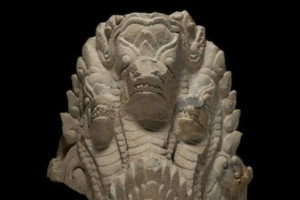 A fierce three-headed serpent and a mysterious female deity were among the nearly two dozen 12th-century stone reliefs from Central Vietnam that lay unseen at the bottom of the Arabian Sea for nearly 120 years. Almost 5,000 miles away in the South China Sea, blue-and-white ceramic bowls, plates and jars rested in the hold of a sunken ship off the coast of Vietnam for more than five centuries.

Preserved like time capsules under the seas, these shipwrecks contained artworks that were excavated in the 1990s by marine archaeologists, sold at auction, purchased by individual collectors and then donated to the museum. By tracing the pathways of these objects, from Vietnam to the ocean floor to San Francisco, Lost at Sea: Art Recovered from Shipwrecks asks questions about how artworks enter museum collections. What does the provenance of an object reveal? What can art salvaged from the sea tell us about trade and the colonial enterprise? Who is entitled to centuries-old artworks recovered from shipwrecks? Should they even be excavated, or should vessels and their contents be left in situ for future generations? The ceramics are from a trading vessel that sank in the 15th century off Vietnam’s Hoi An coast with a cargo of more than 250,000 ceramic objects made for export. After fishermen began to find porcelain shards in their nets in the 1990s, a government-sanctioned commercial salvage operation brought up the cache, dubbed the Hoi An Hoard.

The stone sculptures, relics of the Cham culture that thrived along the coast of Central Vietnam from the 5th to the 15th century, had been carted off from a ruined temple by a French colonial officer in the 19th century. The two works in the museum collection are from a group of 21 that were on their way to France when the steamer they were on sank off the coast of Somalia in 1877. Almost all passengers and crew were saved, but the stone sculptures, apparently too heavy to transport to shore, were left in the wreckage; they were finally retrieved in 1995.
The exhibition includes artifacts from these two shipwrecks, including a slowly disintegrating concretion of objects from the Hoi An Hoard, along with maps and other materials that invite consideration of how artworks travel across time and cultures.

The exhibition Sunken Treasures features ceramics and other objects found aboard eight shipwrecks dating from the ninth to the nineteenth century. The ceramic treasures tell fascinating stories about the Maritime Silk Road in Asia and reveal a hitherto unknown world of international trade and exchange.

Ships from all over the world sailed the Maritime Silk Road for centuries in search of pepper, silk and porcelain. Sometimes the ships that perished lie on the seabed for centuries as time capsules. The wrecks and certainly the well-preserved ceramics provide a trove of information.

The ship San Diego demonstrates that Spain was already a major player in international trade around 1600. It sank during a battle because it was overloaded with cannon, ammunition and provisions. Salvage operations revealed that the San Diego contained products from all over the world. For example, the Kraak porcelain in its hold was purchased from Chinese traders in the port of Manila. The Dutch VOC ship Witte Leeuw sank thirteen years later, after attacking two Portuguese vessels. Greed cost the Dutch their lives: the powder room exploded and the merchandise aboard ended up at the bottom of the sea, a great loss for the VOC.